On tech and games

We all know Ubisoft is in the news lately for some positive reasons. Now they are in the news for trying to defend a hostile takeover. Vivendi made an attempt to take over the french publisher, by gaining maximum shares in the market. An annual stock holders meeting was conducted this week, over settling the cold war between Vivendi and Ubisoft.

The stake at one hand is, Vivendi’s control over the operations of Ubisoft and on the other hand is, Ubisoft’s independance. The stockholder’s meeting was directed to increase the number of board members and also transforming the board with half of independed members and half of founding members. With this scheme put to action, Vivendi tried to instate its own members into the board in order to gain a say in its favour at the end.

Vivendi’s plans were told to the media before the meeting even started. It was said that if Vivendi wasn’t able to make its members, a part of the board, then they might plan for a hostile takeover through stock purchases.

After the annual stock holder’s meeting, Ubisoft shed more revelations on its victory over Vivendi. Yes, you heard it right. They did snatch a victory during the meeting.

It looks like the shareholders showed massive support for the strategy and management of Ubisoft. Yves Guillemot and Gérard Guillemot were re-elected as directors of the board. Along with them, two new independent directors, Frédérique Dame et Florence Naviner who were elected on Ubisoft’s suggestion.

The board now has 10 memebrs with 5 independant directors and 4 women. Ubisoft said it reached its stated objective of 50 percent independent board members, and plans to exceed this threshold by 2017 at the latest.

The president of the company then showed his gratitude for the support from the shareholders over this disupute. This might be the important victory Ubisoft required.

Well thats back to back news coming out of Ubisoft. They are on a roll these days.

Ketchapp is not a well known name out there, but the game they created certainly spread like fire. A few examples  can be  2048, which was a run-away hit, Zig zag, stick hero and stack among the other popular games. This company was founded in 2014 and has already reeked over 700 million downloads in these 2 years. They did a good job of cross-promoting their games through their apps. Their games are less complex and focussing on addictive gameplay, they created a strong base in the mobile games market. And now that base belongs to Ubisoft.

Ketchapp’s robust mobile gaming platform will be used well by Ubisoft to launch their games. But the latter will have to work on a differnt dev code in the mobile platforms to revolutionize the quality of mobile games.

It looks like Ubisoft is making a lot of effort to the 1.4 version update of The Division. They flew to Europe to do some changes with respect to imporvising character balance. As per that post, it seems these are going to be some big changes that are going to affect the overall gameplay. 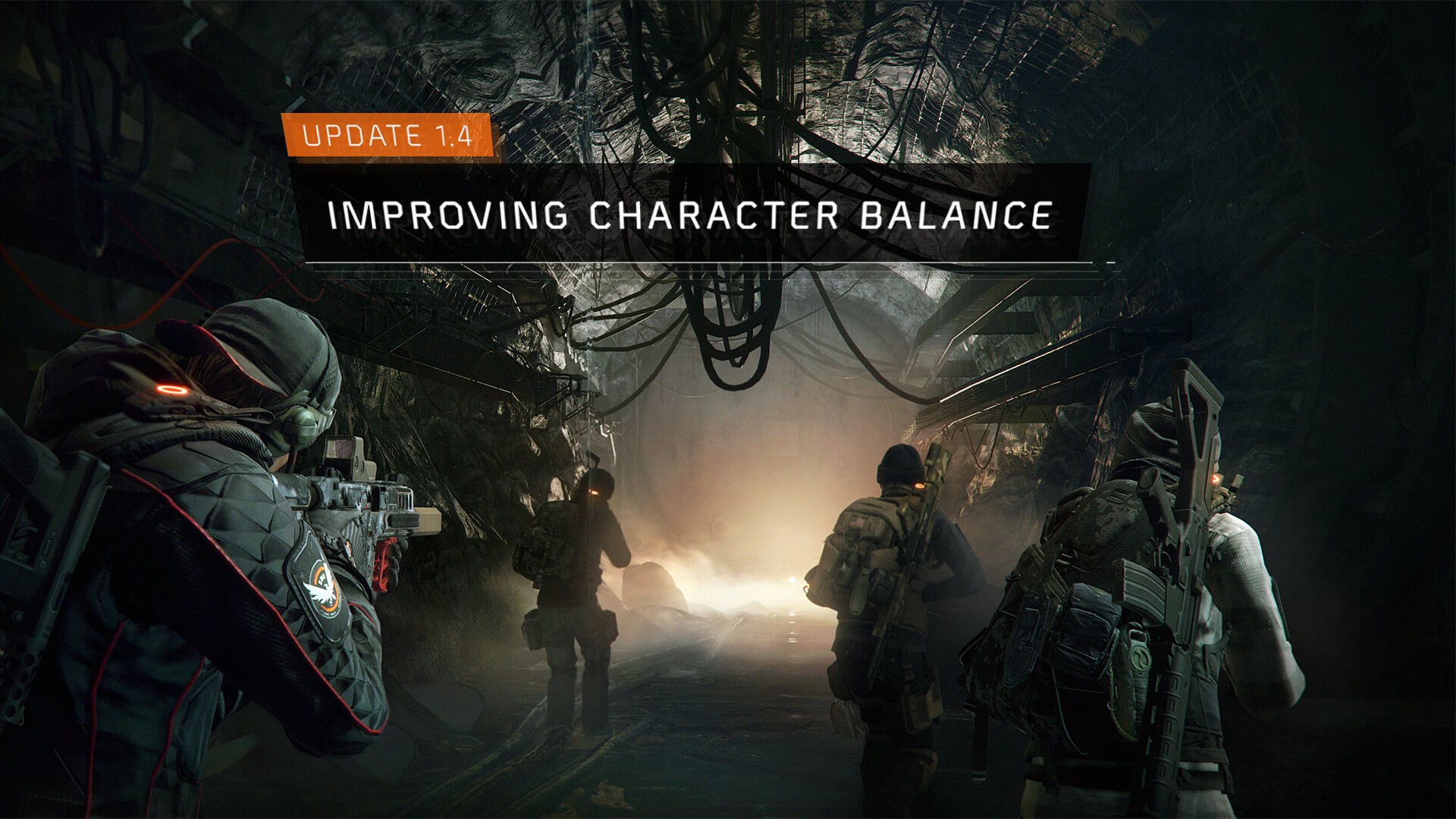 After Update 1.4 is implemented, every piece of gear dropped in World Tier 2 and higher will come with each of the three main stats. One stat will always be higher than the other two but you can still recalibrate them like before.They are looking to rescale the builds for the characters. As part of Update 1.4 they also are going to bring back the shooter feeling, add more decision making and hard choices when building your character and add more variety to the viable builds.

At present critical hit chance percentage and the headshot damage will be scaled down as they are extremely high. This might give a feel that the game is going to be hard to play with these two main stats rescaled to a lower number. But there will be adjustments made with the enemies too in order to maintain the on-field balance. Skill bonuses will be no more on all pieces of gear. Backpacks, holsters, and knee pads will now have performance mod slots.

The higher Gear Sets won’t become less powerful, the change in scores will make it much clearer and easier to understand. When joining groups, some players can kick a joining player just because their gear score is too low. At the same time however, if someone was using all High-End pieces, then naturally, their gear score would be much lower anyway as these pieces only come with gear scores of 163, 182, 204 and 229. With the changes to gear score, players will actually be able to use High-End pieces to create different builds and then join groups without being kicked from a group just because their gear score is too low.

Scavenging has also been an issue for a long time. If scavenging is present on the current gear, that stat will be replaced and rerolled. Players need not swap gear for a specific result while they are playing. If Scavenging was made too good, the players might end up in a situation where they would switch to their Scavenging gear before killing a boss. Weapons are undergoing a similarly comprehensive overhaul, with changes to DPS formula, weapon mods and talents, damage bonus calculations, and other related features. Armor is also being changed to reduce its impact and make player health via Stamina. This means that in order to play as a tank, the players have to step up their Stamina, at the expense of Firearms and Electronics.

Here is the detailed chart on the 1.4 updates on primary stat roles 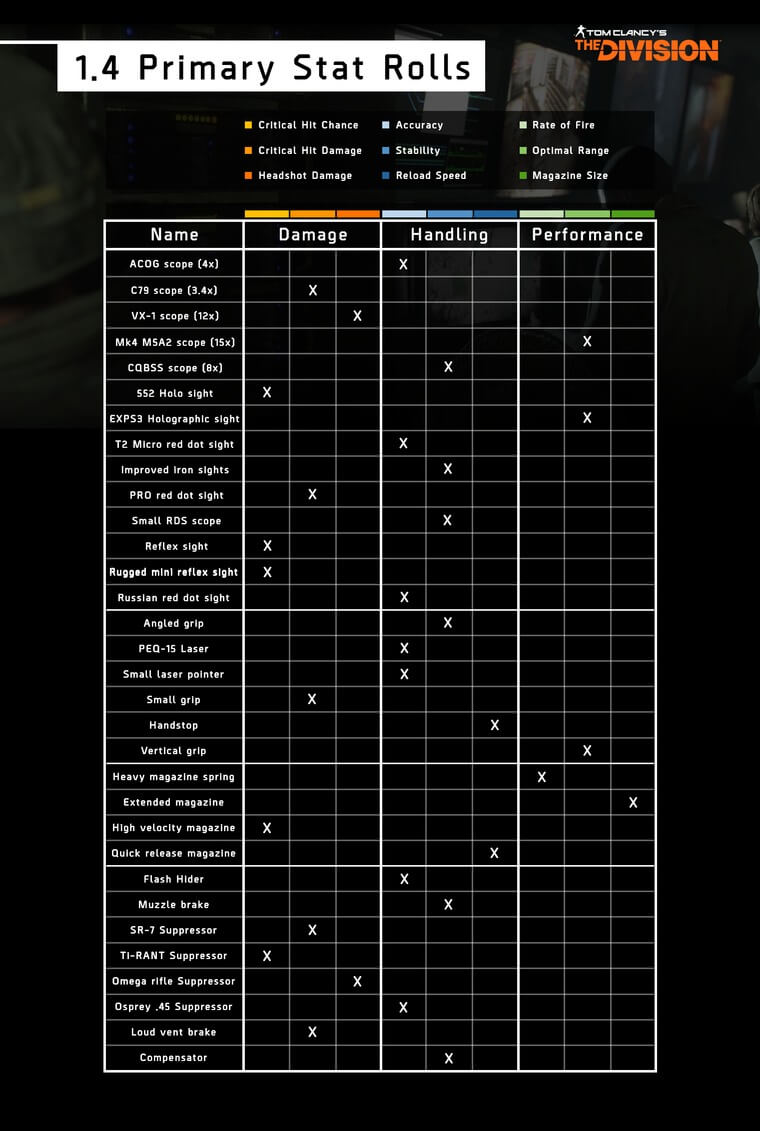 Hence imagine how these great changes will impact the outcome of the game. Every little detail is being updated or rescaled, making the game even more interesting.

Over the years, as gamers we would have come across a lot of first person shooters. Some really good that keeps us involved and some average. However whatever the game may be, there is one things that every FPS gamer would enjoy. That is to snipe the brains out of the enemies. Sniping is an essential skill when it comes to long range combat. Accuracy is always put to challenge when playing as it differs from game to game based on the game’s laws of physics. So here we pick the top 5 games where sniping skills are really put to test.

Sniper challenge is a sub-game from the main hitman series. This game is totally sniping the enemies from balconies and roof tops. One of the best logics of this game is using a silencer. As the mission involves taking oppenents down without being noticed, it serves important to use a silencer while sniping one person, while the other doesn’t notice.

Though an old game, its gameplay and the laws of physics in using the snipers here is amazing. The speed of the wind  from the target has to be taken into consideration while sniping. So you need to mentally calculate the point where the crosshair of the gun needs to be placed in order to get a perfect kill shot. A light miscalculation in placing the crooshair correct, will be a costly miss. It is just as realistic as it gets.

Far cry 3 has some incredible real time sniping options. As you will see in the video, there is an option to hold your breath while shooting. There is a reason why this option exists. When taking oppenents down from a really long range, considering the wind factors too, even a light shake or movement in the body could cause a miss with the shot. Logically, when snipers hold their breath in, their body stays still for a few seconds, helping them take a clear shot. When you breathe continuously, the motion of the lungs will move your chest up and down which will affect the shot. Hence this logic in this game is awesome.

This game is totally a dedicated sniper game. Here you need to consider the speed and direction of wind and the distance from the target too. Using these three factors and other environmental conditions, you need to place the crosshair at the right place and take the shot at the right time, to take the enemies down. The challenging part is some of them will be on the move. Hence applying all these laws of physics and taking a moving target down is quite interesting and also requires skill.

I personally think this is the god of all sniping games. The reason being, it uses all possible logic and laws of physics required. To have a successful shot, you need to consider the speed and direction of wind, gravity – which is a new factor, distance from the target and your heart beat, which is holding your breath in. So you can see now why this is the most realistic sniper game. The reason for gravity as a factor is, it varies between different landscapes. Hills and mountains have lesser gravity while the ground has the highest. Hence the location of the target and the location of the sniper also matters based on the landscape they are in. Also this game provides graphic content on bullets passing through a body or an object in an x-ray vision which is also ironically pleasant to watch.